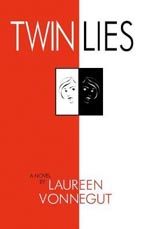 What happens when one lie becomes two lives? At the complicated age of seventeen, Hetta hijacks the identity of her dead twin sister and launches an adulthood that is not her own. But when a California earthquake rattles her false existence, Hetta discovers that fleeing her late sister’s domination may not be as easy as it seems. As her tale unfolds, narratives from lovers, husbands and friends reveal a provocative story.

A dramatic journey from San Francisco through Romania, Panama, Nova Scotia and Zanzibar for one woman who is on the run from much more than just herself.